This is Carefree Elise from Make it Crafty, but maybe you don’t recognize her. You don’t?  LOL.  I used some Creative Color Placement and took up Zoe’s Zombie Challenge.  Happy Halloween! 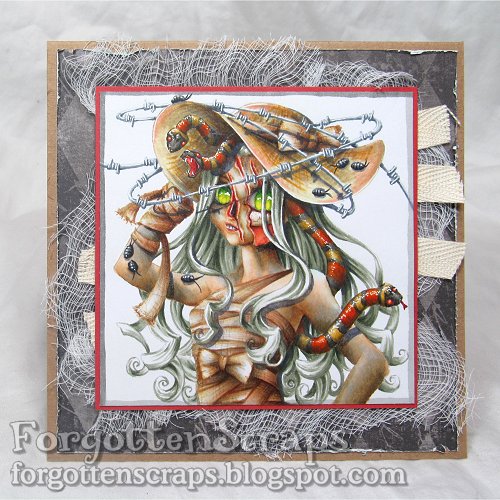 I made lots of transformations but first sketched it out on a second image.  Not all my ideas made it to the final project but that’s the way of things.  Here are a few things I did:  Her face was scratched by some beast and ripped her nose off and part of her chin.  She probably fed them to her pets or nibbled on it herself and this new look makes things easier to smell anyway.  I’m sure that her brains have been eaten and that’s where the snake are living – so she uses the hat to keep them from falling out.

Her skin is suppose to be a rotting green with some bruising.  I’m not sure that worked out but I think it’s putrid enough to pass as a Zombie.  Regardless, it’s rotting enough that she’s started using bandage wraps to keep herself together.  The bugs crawling around and the barbed wire were elements that I included to add to the creepy theme.  I wasn’t sure what to do with her eyes so I went with a bright green for a spot of color that would lure your attention.

The image was colored with Copics on printer paper; plus I used a pencil on the bandage to add the hash texture.  This is a digital stamp that I printed out at 90% lightness, but however light I put it, there are always residual printer dots.  On the real life project, these aren’t as pronounced as what I see in my photos. Hopefully you can see past that and enjoy the image.  Well, enjoy it as much as you could a Zombie image.  LOL 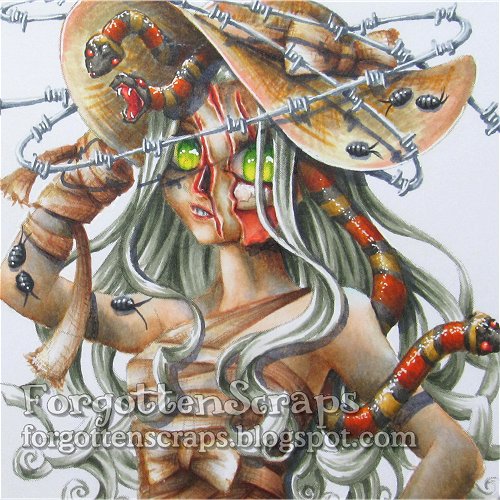