Last time I used the label from Mazarine Butterfly Fairy rubber stamp and then I stamped it and was able to color it in my own style. I wanted to follow a card design by CherylQuilts from Splitcoast Stamps which was an inspiration to me. For the back part, I used the Wire Fence Embossing Folder, also from Whimsy Stamps.

I’ve used the label from Mazarine Butterfly Fairy rubber stamp which was originally colored by Bev. She did such an awesome job and it fit perfectly with the papers I wanted to use. I then stamped a portion of a sentiment from Magical Birthday Wishes and used the Shaker Maker Pennant Flags die set for a shaker element. 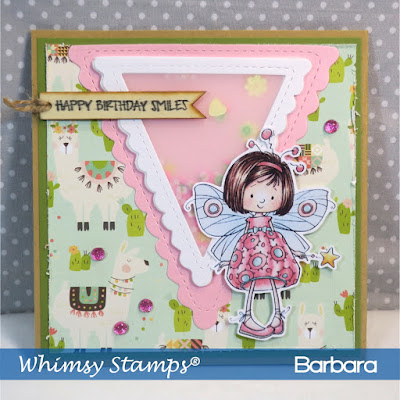 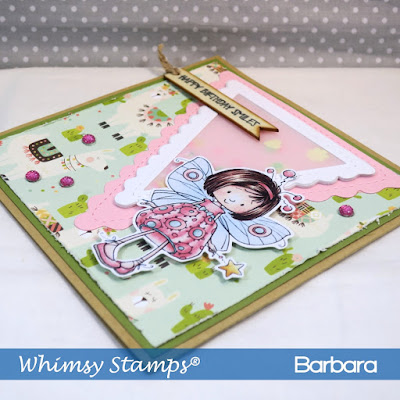 Remember the last project I did trying out a new technique by Sue?  After getting some tips from Sue, I used a glossy paper and tried it again. It made a world of difference and the colors are so much more vibrant. It was easy too and now my girls have been having fun creating their own papers. 😀  For this project I used Faye the Fairy as well as the Magical Birthday Wishes Sentiment stamps, both from Whimsy Stamps.

I thought this little fairy would be perfect as a little bee so I dug out my yellow and black papers from the back and colored her up.  This is Flower Fairy from Whimsy Stamps and I also used the Card Builders Window Die set from Whimsy Stamps too. I colored her outfit first and wasn’t sure where to go with the hair color but thought a little green with be refreshing.

It’s release week at Whimsy Stamps and I have some new products to show off. For my project I’ve used Emma and Aime as well as the new Card Builder Windows die released this month too. I fussy cut around the image and used just one of the fairy girls.

This card has been waiting for weeks to be published – and here it is finally! I made it using a Pergamano Fairy and Pond-a-Lily from Make it Crafty. Because I had bright and busy decorative papers, I keep the embellishments to a minimal and only added a few Dew Drops. The dragonfly was unplanned but I decided I didn’t want to cover it so I cut it out before possitioning the fairy over that area. It worked out nicely and I didn’t have to color another one!

You can see most of the background already but here is a detailed look before it was put through the Cuttlebug. I really debated about coloring the frog a different color but green would have blended in too much and orange or yellow would have been too much next to the flowers. So in the end, I used my E70’s Copic colors. As a final touch, I added sparkles to the flowers and dragonfly wings – because we all need a little sparkle on our cards.

Did you know? The national flag of the United States of America consists of thirteen equal horizontal stripes of red alternating with white, with a blue rectangle in the canton bearing fifty small, white, five-pointed stars. The fifty stars on the flag represent the 50 states and the 13 stripes represent the original thirteen colonies that became the first states in the Union. The last revision of the design was 50 years ago on July 4, 1960 with the addition of the 50th star representing the state of Hawaii.
[Flag of the United States, Wikipedia.org]