It’s another Mystery Monday day at Club Anya & Friends this week! Today we are CASE’ing a card by Kim (Paperbabe)! Her card reminded me of a Polaroid so I was inspired to color a black and white image. For this card I used Fancy Anya and finished with antique brads, sequenced black lace and laser cut embellishments covered with liquid pearls. The decorative paper I used is a couple years old! 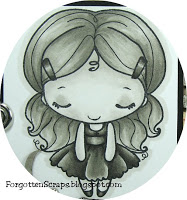 Did you know? Man on Wire is a 2008 British documentary film directed by James Marsh. The film chronicles Philippe Petit’s 1974 high-wire walk between the Twin Towers of New York’s World Trade Center. The title of the movie is taken from the police report that led to the arrest of Petit, whose performance had lasted for almost one hour. The film is crafted like a heist film, presenting rare footage of the preparations for the event and still photographs of the walk, alongside reenactments and present-day interviews with the participants.
[Man on Wire, Wikipedia.org]