If you’ve been following Make it Crafty on FaceBook you might have seen everyone share their Christmas Trees on that page.  There area so many gorgeous trees out there that I almost felt the urge to redecorate mine in a different style.  But I was saved because the kid’s already decorated it and there was no way I was going through all *that* again!  LOL  Anyway, if you posted your picture then Zoe generously sent out images to share in the Christmas giving spirit and one of those images was this stack of Christmas Pressies.  I love that they’re versatile for all occasions but I decided I wanted to go all out Christmas!

The image I paired it up with is also a freebie that can be earned at Little Miss Muffet Stamps named Polka Dot Pals Neva.  I had colored her face and added a cheek and nose tutorial in the LMMS FB group for those who want to give your beadie-eyed-friends a little more character.  😀  I hope to post another one for eyes but with Zoe’s challenge a while back, I think many have already experimented with those.  For this image I did an impromptu step-by-step coloring guide which you can also find in the LMMS FB group.

The stack of presents were colored mainly in reds, greens and white and the character was done in blues and pinks.  To help bring the images together I added a bit of blue and pinks to some of the outer packages then made sure to add reds to the package she was holding.  Finally I assembled the card (trying) to use the December Make it Crafty sketch – however, the image was so large that I ended up jumbling up the pieces and making something else work.

Lastly, I added some embellishments that I hadn’t used in a while including the chipboard, micro beads and cheesecloth.  The card is still reasonably flat so mailing it is still an easy possibility.  I hope you’ve enjoyed this bit of inspiration and thanks for checking out my project!  😀 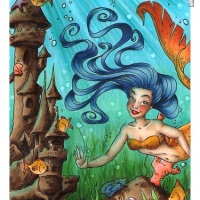